Capitec is one of South Africa’s leading retail banks whose head office is in Stellenbosch, just outside of Cape Town.Over the past twenty years Capitec’s headquarters had grown into multiple buildings spread throughout the Techno Park complex in Stellenbosch.

Capitec is one of South Africa’s leading retail banks whose head office is in Stellenbosch, just outside of Cape Town.

Over the past twenty years Capitec’s headquarters had grown into multiple buildings spread throughout the Techno Park complex in Stellenbosch. Due to growth and the need for enhanced collaboration, Capitec decided to embark on building their own new head office building in Neutron Road, Techno Park.

Collaboration was appointed to design the interior of the building which was to accommodate around two thousand staff including the various facilities needed to support the working environment. Many months of planning went into creating the layouts, which balanced open plan working areas; enclosed meeting spaces and informal collaboration spaces. The collaboration spaces are strategically placed in and around working areas with work tools in the form of furniture and technology to promote collaboration and idea sharing. The working environment’s flexibility was enhanced by the high number of staff using laptops throughout the environment allowing more dynamic use of the various spaces provided, like the central atrium.

The building consists of three floors with a central atrium with circulation passages; and interconnected bridges overhead for circulation crossing the floors. On the ground floor is the reception with external meeting room zone; an atrium with coffee bar; an informal meeting zone surrounded by large sub-divisible training rooms and open plan office areas. A two hundred seater staff restaurant with various seating configurations and a full onsite catering kitchen facility housing various food stations at the servery counter, is located on the first floor. The building has five cores which contain the offices; meeting rooms; focus rooms; pause areas and ablution facilities, with open plan office space in between the five cores. The organic shape of the cores provides visual privacy and makes the large open areas appear less vast and more appealing.

The design concept for the building’s interior was based on the value of simplicity and brand colours which were only used in the reception and external meeting rooms, to reflect their values. Each core or ‘hub’ within the building was given an identity by assigning a colour to both the core and the surrounding furniture, in order for staff to orientate themselves while moving throughout the building.

Signage plays an integral part in the interior design with brand signs appearing in the morning and disappearing in the evening when the signage lighting is switched on / off, leaving a smooth polished white finish. Artwork in the form of large format acoustic panels were used in the meeting rooms and furniture was upholstered in vibrant colours to offset the white modern interior. 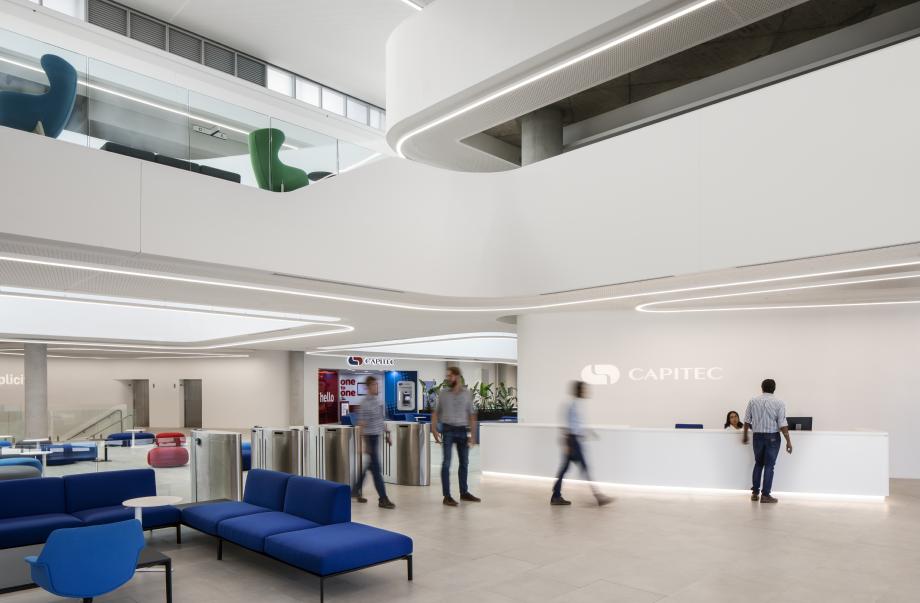 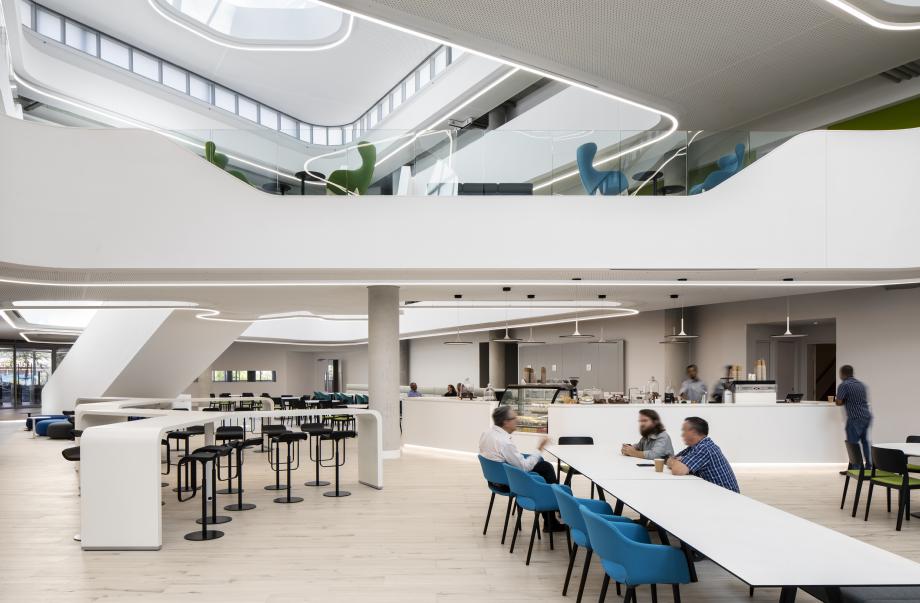 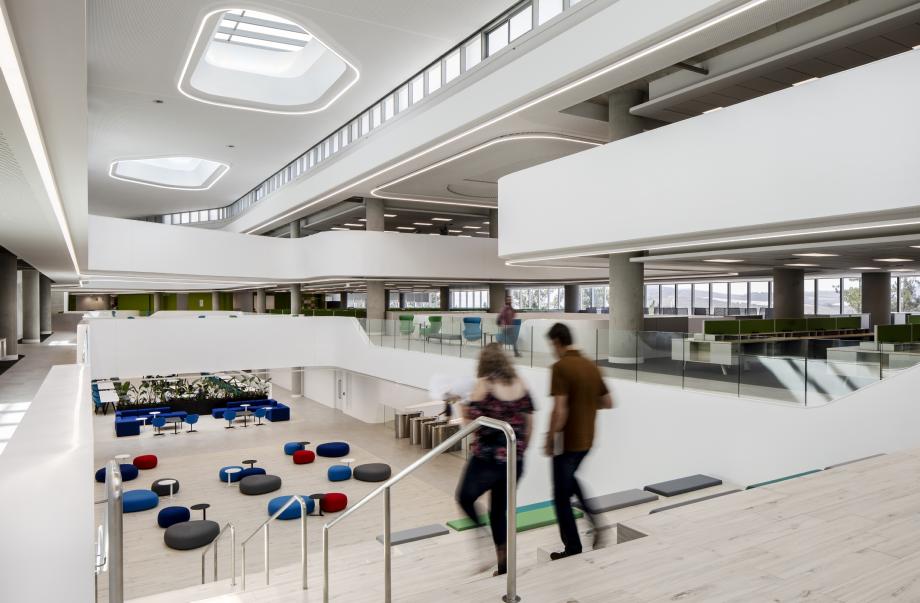 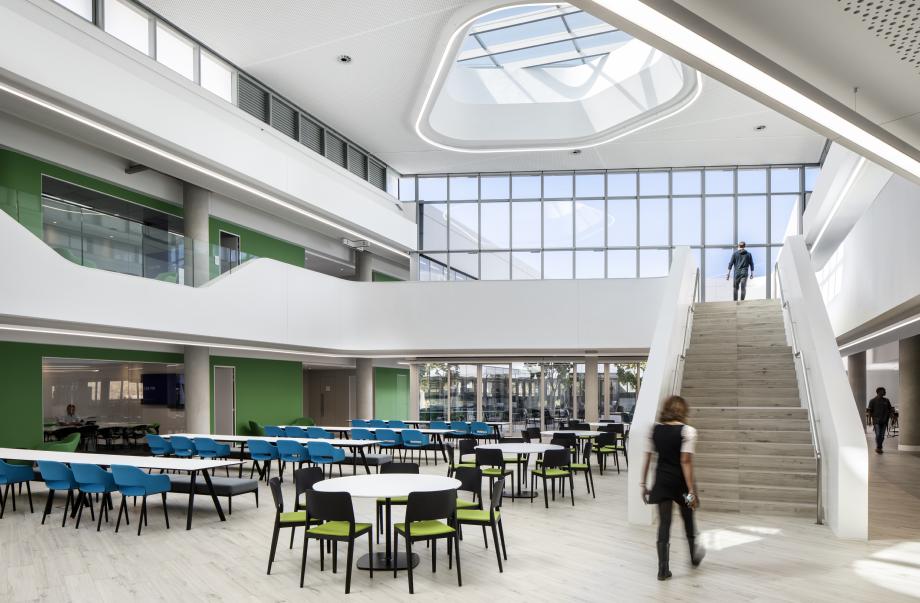 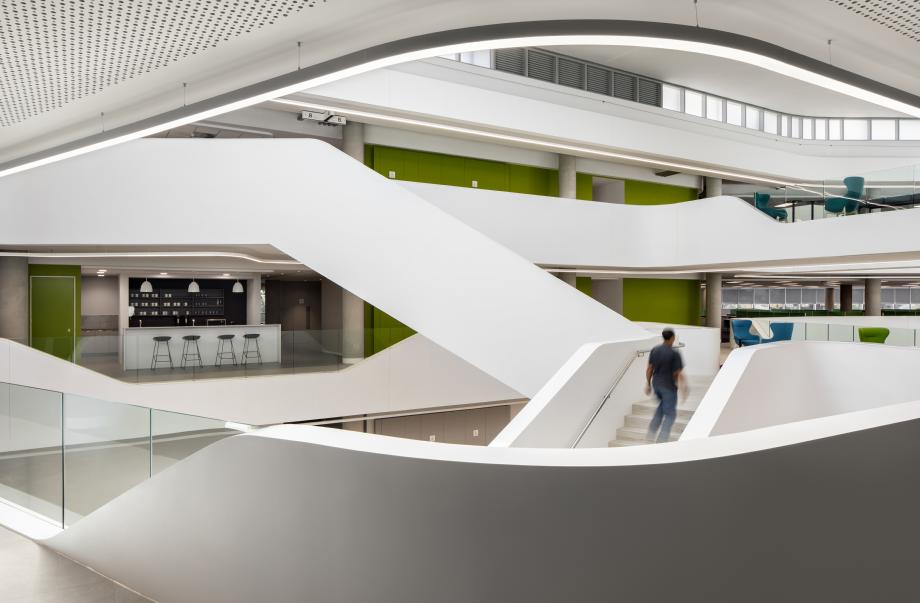 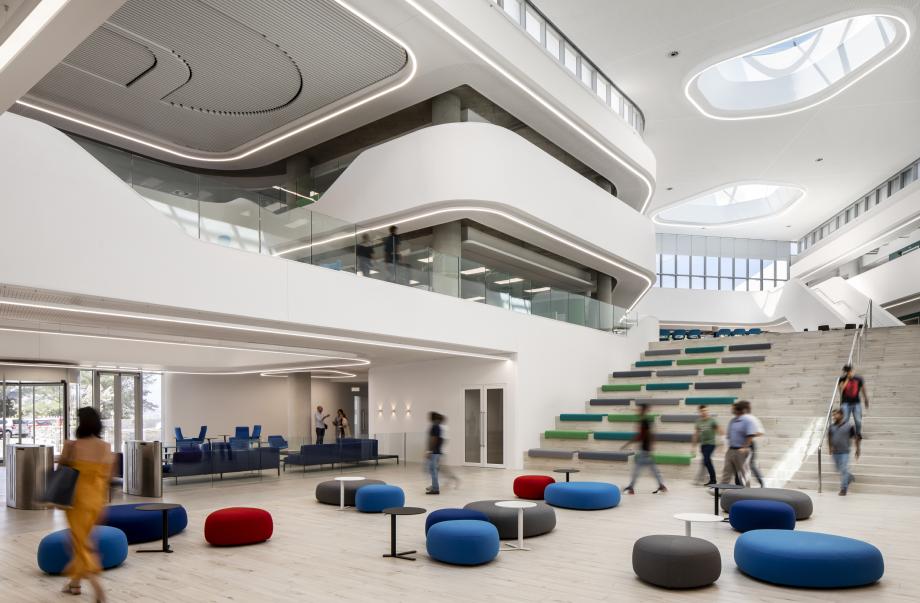 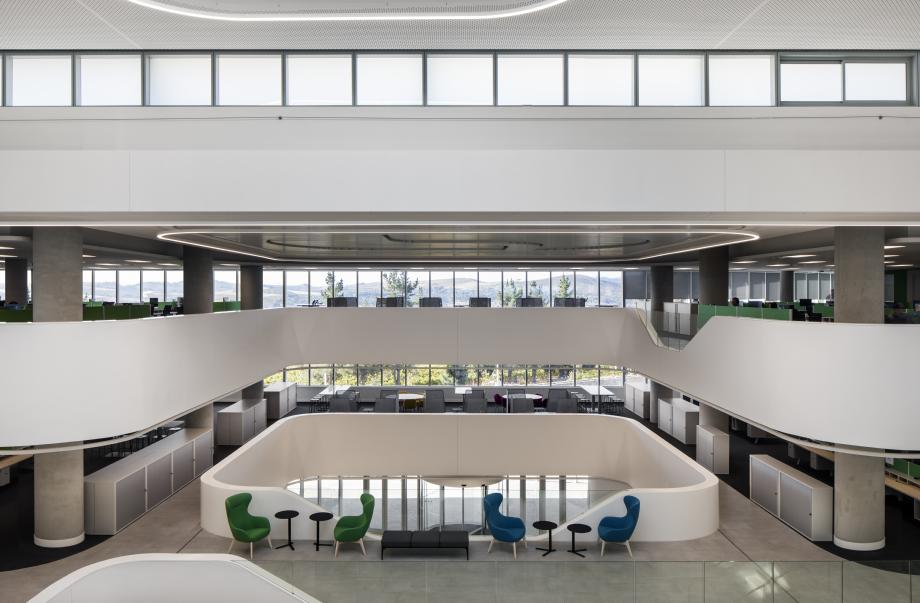 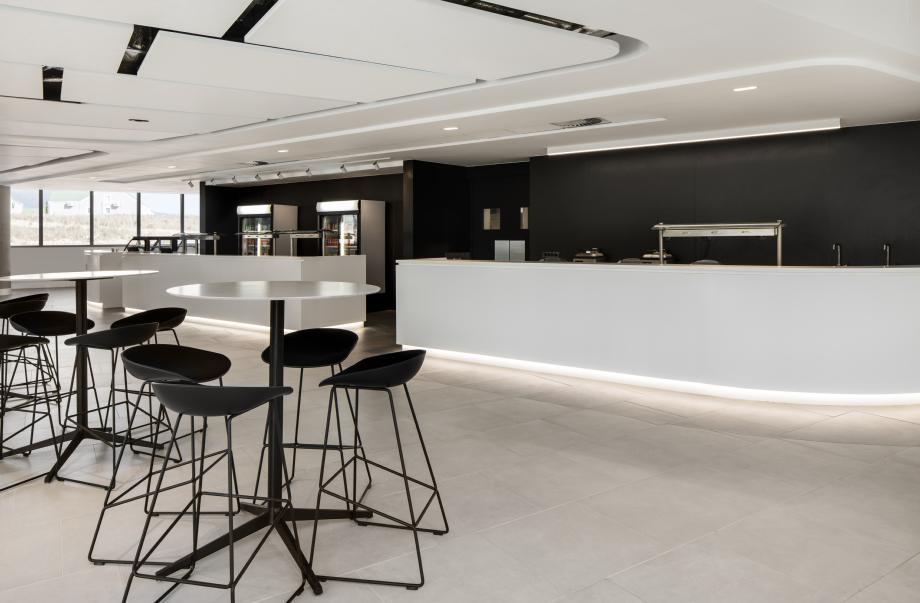 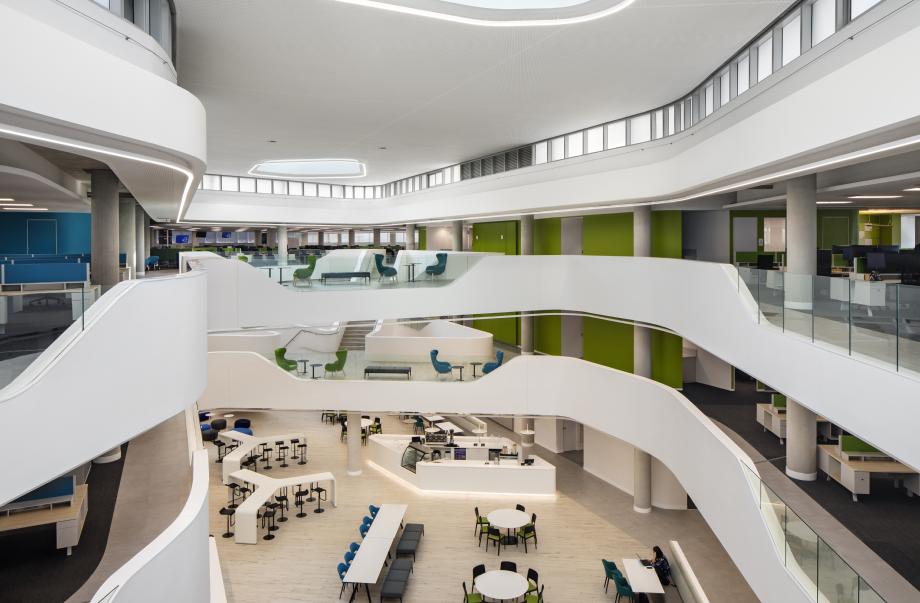 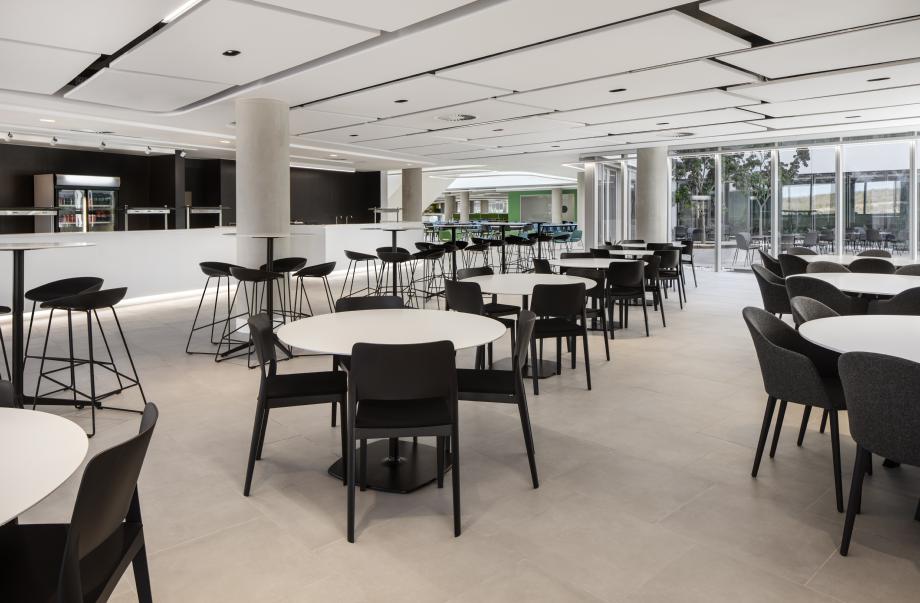 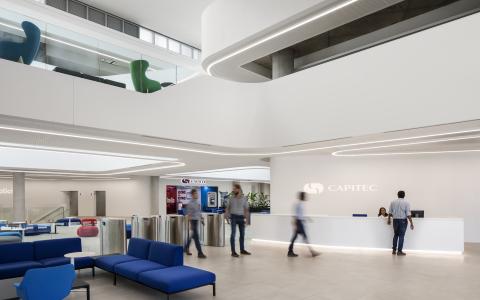 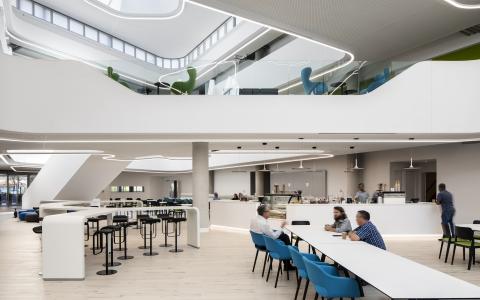 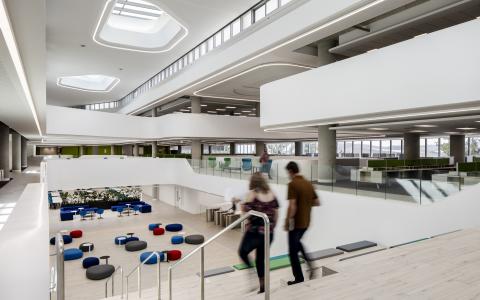 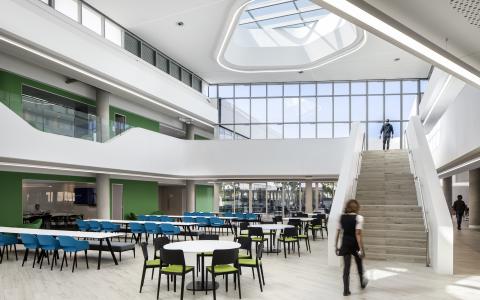 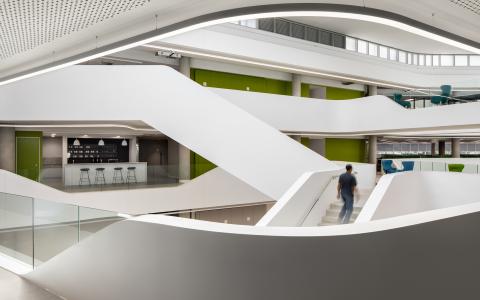 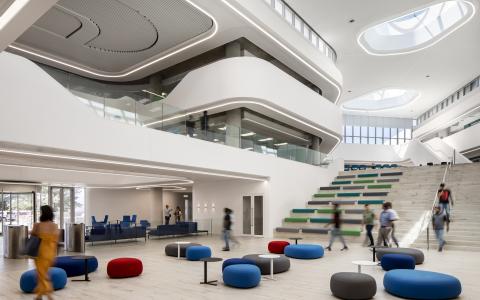 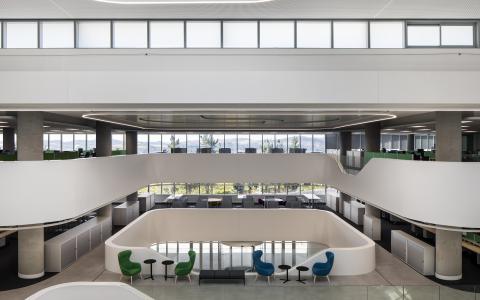 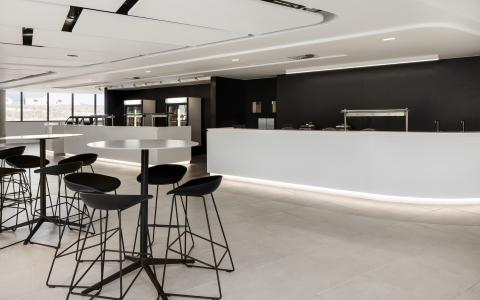 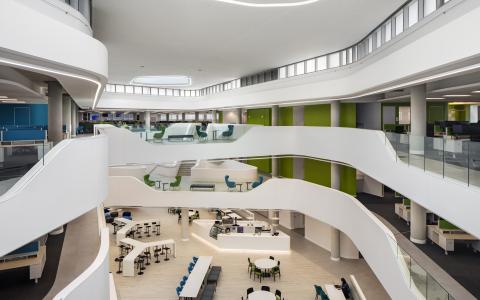 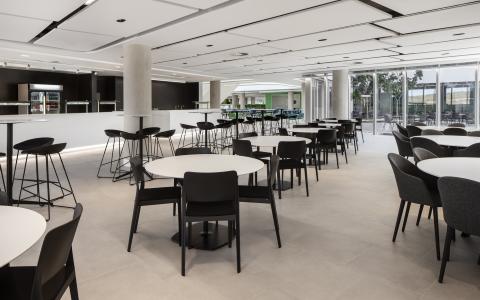