Colorado architect Renzo Verbeck and artist Sylvia Adrienne Lisse have designed an eight-pointed angular structure to serve as the temple at the 2020 Burning Man Festival.

C olorado architect Renzo Verbeck and artist Sylvia Adrienne Lisse have designed an eight-pointed angular structure to serve as the temple at the 2020 Burning Man Festival.

Called Empyrean, the pavilion will form the centrepiece of the temporary Black Rock City during the annual gathering. It will be burned on the final day along with the namesake "man" and other structures built on the playa.

Laurence "Renzo" Verbeck, the founder and principal of Verbeck Design Studio in Boulder, Colorado and project partner Lisse, an artist with experience constructing large scale art installations, were among a number of teams that vied to design the 2020 temple.

Their winning scheme is named Empyrean, which refers to a region beyond the physical realm said to be the birthplace of fire.

"Empyrean represents the region just beyond our physical realm that is the highest center of wisdom, and the source of energy-consciousness," the design team said. "In ancient cosmologies, Empyrean is the realm of pure light that is believed to be the birthplace of fire."

It will comprise eight angular pavilions that will be arranged to form a star shape. They will be constructed using conventional framing lumber, and latticework walls. Verbeck and Lisse chose the material for its ease of construction and its combustibility.

"The simple geometry of the star creates a sacred foundation and activates the temple as a transformative healing portal for every Burner to experience in their own way," they said.

The celestial cutouts are designed to allow sunlight to filter inside during the day, while at night light from its interior will radiate outwards.

When visitors venture into the monument, they will enter through one of eight narrow apertures created by the formation of the blades and traverse into "the multiverse." 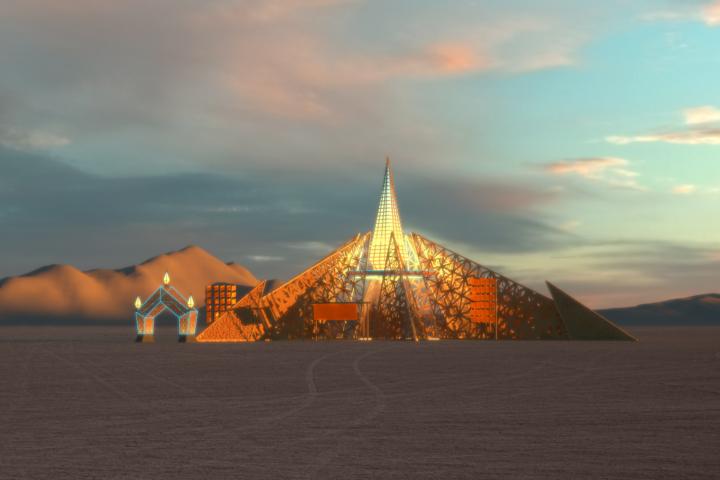 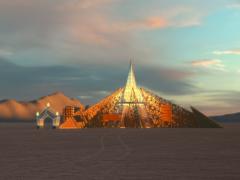